It’s not a secret that I’ve moved to another country last year. For me it was a challenge as well as a good opportunity to get to know new people and explore new lifestyles. At the same time I realized that I didn’t have any friends and acquaintances to spend time and share opinion with. How have I overcome this problem?

Basically you can use the approach I’ve developed whenever you need to dig into the field you are not familiar with. Some people I know are not satisfied with what they are doing and would like to change the occupation but they don’t know how. Some people don’t know how to get acquainted with people in other social layer. I’ve written these 5 tips below for all of you ;-)

Okay, let’s imagine that you are an HR specialist but would like to dig into IT. You don’t know any people in this field. So what you do is:

Set up a twitter account. If you don’t have any, of course. Fill out the description about yourself. You can write IT enthusiast or any other description that would connect you to IT area. Important! Use hashtag # before words to convert them into keywords. So, instead of IT enthusiast you will write #IT enthusiast. Or better, #IT enthusiast living in #Bratislava (or your city). When Twitter users will search somebody to follow on Twitter in IT area, they will most likely find you. Don’t forget that mentioning your location is important.

Search specific keywords. Just like any other user interested in a specific topic will search it on Twitter, do the same. Write down several keywords that interest you. They may be for example IT, web development, web design, programming and Bratislava (e.g. your location). Write as many of them as you can think of. Then read the description of profiles and follow interesting people.

Install TweetDeck. It’s a program which consolidates your Twitter, Facebook and also some other social accounts and shows you notifications in pop up windows in real time. I am not promoting it, but I use it every day and it’s so convenient that I sincerely recommend it to everyone. One thing that is bad that it doesn’t recognize Cyrillic and can’t post to a Facebook page for example. If it could, it would be AWESOME! What it does now is sending you notifications about every tweet of the user you follow. Twitter is about quick reaction, and that’s what is really cool about it. If I follow news portals I am first to know about important news and events. If there is sweepstakes or a promo with a limited number of participants, I will be first to react. Doesn’t it sound great?

Retweet and reply to tweets of people you are following. It’s really important in terms of getting known and noticed. Be smart, give advices, help people, share their information. 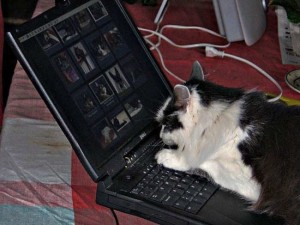 They will notice that. Though some people will start following you after you follow them in return, some other will do that after you reply to them or retweet them.

Start tweeting. As a newbie, you probably don’t know what to tweet about. You’ve heard that some people tweet about how they ate or how they enjoyed a walk somewhere. Unless you are working in HoReCa industry or tourism, this kind of tweets would rather make your new Twitter friends unfollow you. Instead, post short useful piece of information for your audience. Every time you read an article about IT, or will have a thought after reading this article, tweet it. Question can also be a good start. Many middle sized companies first tweet about new position they have, and then, if they didn’t find anybody, will post it at job banks. Once you have a wide audience, you’ll surely find an answer to your question on Twitter. In the meantime, reply to questions of others:)

Watch for tweets about targeted meetings in your area. People who are interested in a specific topic, sooner or later get to know each other. They attend similar meetings, workshops, conferences, informal parties. Twitter is your chance to become one of them! With its help you not only will know about almost all events in the area that interests you, but also will be quicker than others.